Today marks the anniversary of our 1st year in our first home!  Over the past week I have been highlighting different rooms in our house and what changes have been made over the past year.  Today, I thought I would wrap it up by sharing the miscellaneous things that have been changed and updated around the house. 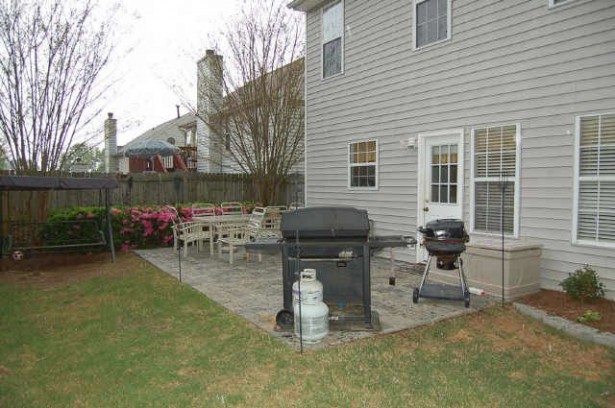 Before
We have planted sod in an area between the patio and retaining wall that had been bare when we moved in.  It looks like the previous owners had a swing with a canopy sitting in this area and that is why there was no grass.  We were worried because we had seen water pool in this area which might kill any attempts at keeping grass there, but when we dug around we actually found a drain that had just been covered up.  Water problem solved! 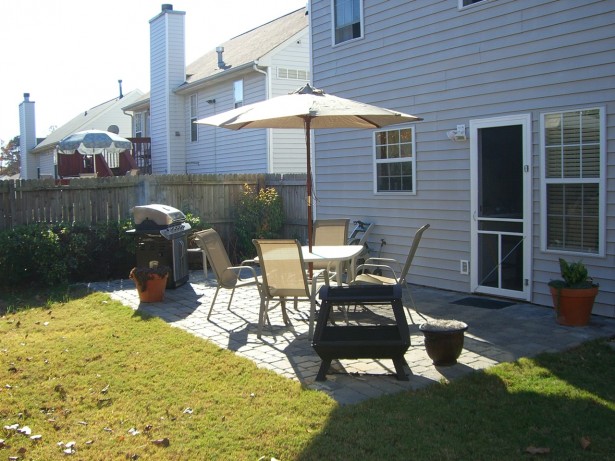 Upon moving in, my parents gave Bradley a new grill as a house-warming gift.  He was so excited to have a grill and we have used it so much this past year.  We also bought a patio table for $25 at the end of the season last year to replace the dinky plastic one I had from college days.  We also bought a table umbrella on sale last summer.

We also got a few large pots and have started somewhat of a container garden on our patio!  I am not big into gardening, so using containers is an easy way to bring color into the yard. 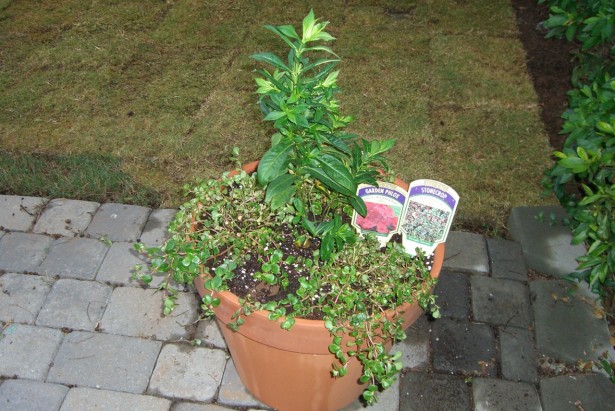 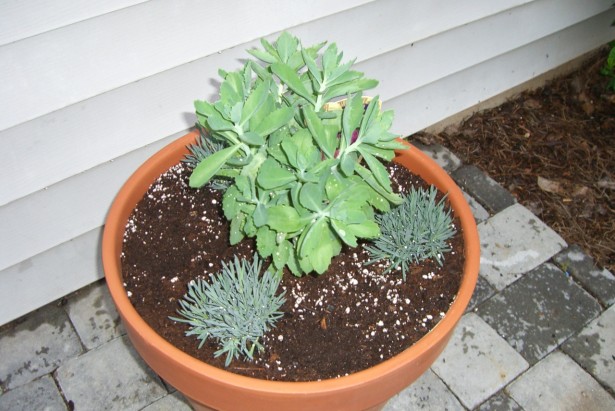 One of my favorite things in our backyard is the bird feeder.  I am so glad that we have three big windows in the living room that I could place the feeder in front of.  I love watching the birds…does that make me old?  I also sanded and repainted the trim around the back door and Bradley added a screen door which is fantastic on pretty days.

My mom came up a couple of months ago and helped me clean up the hill in the back yard a lot.  She also planted a cute garden on the side of our house in the courtyard leading to the back yard.  The latest project I have finished is repainting the outdoor fireplace that the previous owners left.  It is iron and had a good bit of rust, so I scrapped off as much as I could and painted it with a rust reformer and then high heat paint. 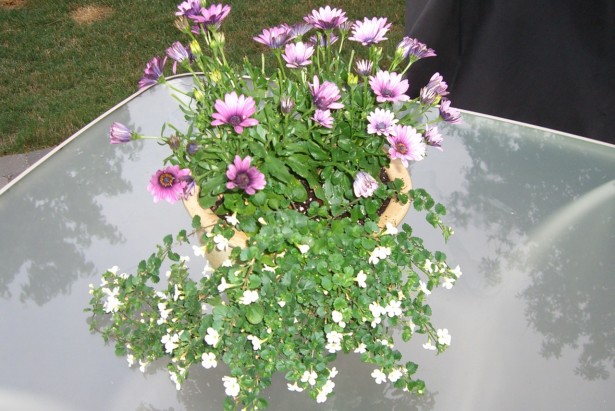 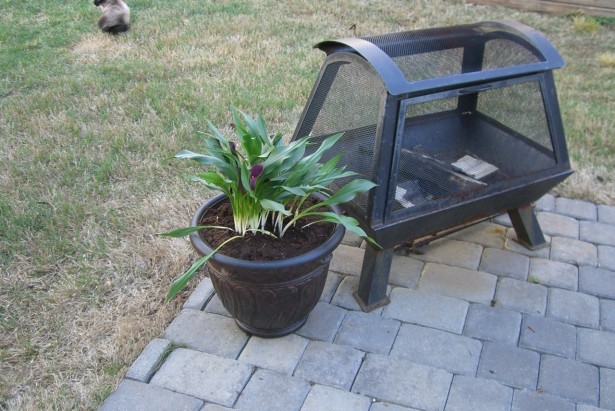 Wish List: We think the back of the house looks a little blah, so we would like to add a pergola over most of the patio to add interest; I want to tier the hill in the back yard so that it is easier to maintain landscaping up there;  We have talked about pulling out the messy azaleas between the patio and fence and putting in privacy shrubs and other decorative plants;  In the winter I intend to move a beautiful hydrangea from the side of the house where it is never seen to one side of the hill, and eventually have a row of them along that side of the fence;  Also there is a Japanese tulip tree hidden at the top of the hill that I would like to move in-line with the dogwood and magnolia tree on the other side of the hill.

When we moved in the front shrubbery bed extended out in front of our sidewalk to the front door.  This annoyed me because when multiple cars are in the driveway it was not easy to get to the sidewalk without stepping through a flower bed, which most people would not want to do.  So I dug out the rock border and shifted it over (to Bradley’s frustration) to make way for sod.  But it wasn’t the right time of year for sod, so it was kind of a random mound for more than a few months.  Finally spring rolled around and we put in some fresh sod and boy, does it look good! (We also patched a place beside the patio while we were at it) 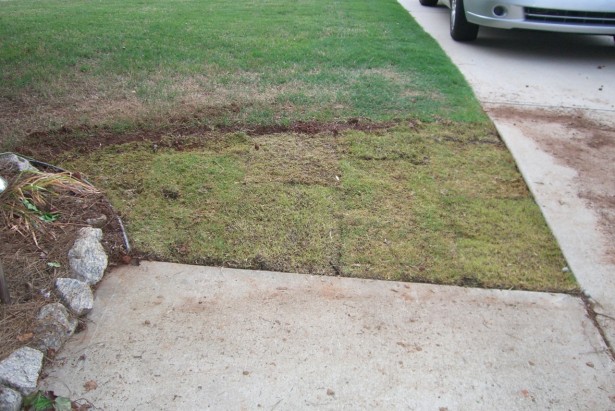 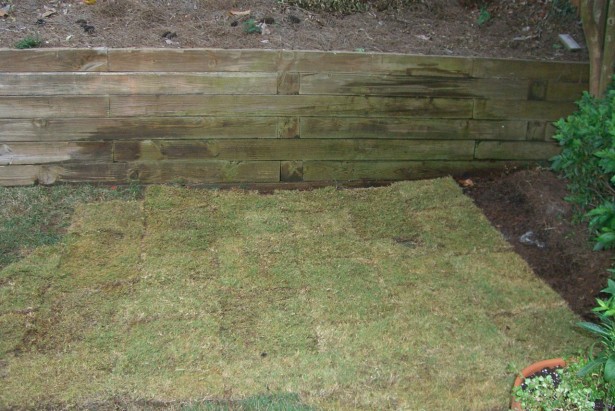 Right after we moved in, I decided the mailbox was too blah, so I stained the post and replaced the mailbox with a shiny new one.  I also planted some dwarf gardenias, but they have not done too well, because they get too much sun in this spot…oops. 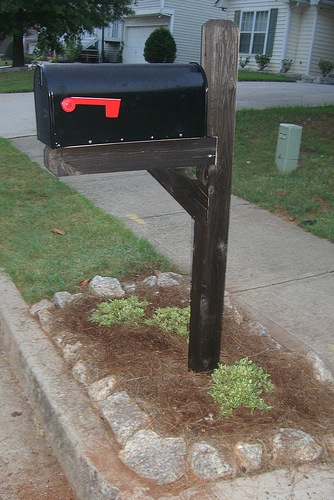 Wish List: In the fall, we plan to cut down the huge Pear tree that sits next to the house and replant a different kind of tree further down in the front yard.  The front shrub bed will need to be reconfigured once the tree is gone and more sod will need to be put in. I would also like to replace the rock border around the beds with a more uniform looking border.

Our front door is one of the next big projects we want to tackle.  The door itself is fine, but neither of us like the half lite window, so we would like to replace it with something a little less ornate.  At the same time, we would like to change out the hardware and light fixture from shiny gold to black or oil rubbed bronze. 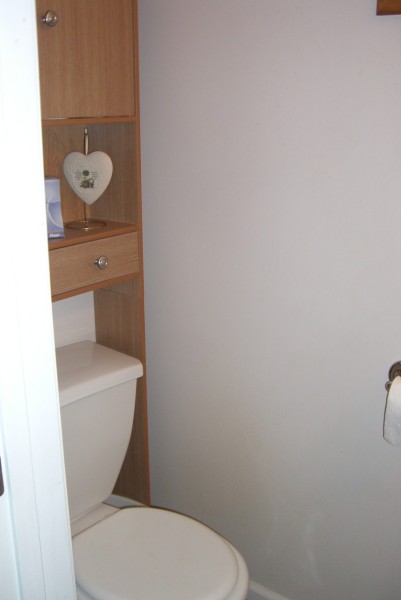 The previous owners had a very country-looking ivy border painted in this bathroom.  The trim around the mirror also had this ivy pattern to it. 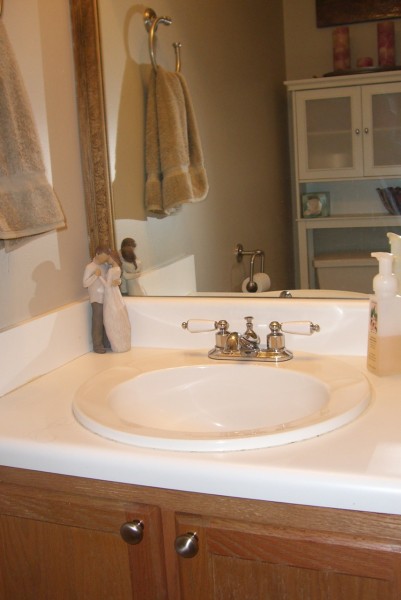 My mom painted the room khaki (Toasty Grey by Glidden) and I painted the trim white to make it look a little less country.  I changed out the towel bar and TP Holder for a satin nickel towel ring and holder.  We added satin nickel knobs to the cabinets and brought in the white over-the-toilet cabinet from the apartment to balance the room out.

My mom was kind enough to give us some of the leftover floor tile from her basement and she tiled the floor in this bathroom.  There were some tricky cuts, but she did a fantastic job.  My next project in here will be to sand and re-stain the vanity cabinet with the same rich stain that I used in the guest bathroom. 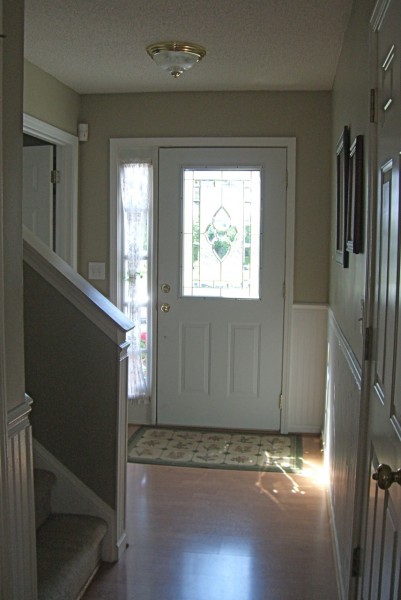 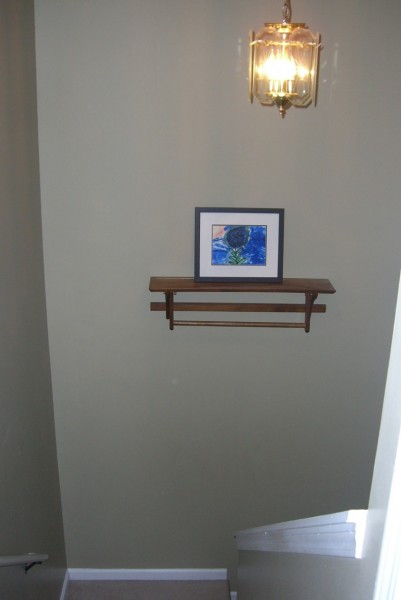 When we moved in, all of the ceiling fixtures were the shiny gold color.  We bought cheap plain fixtures at Ikea for the hallways, and I found a new oil-rubbed bronze fixture for the foyer at a store in Carrollton called Robinson’s Salvage for $15.  We also hung the iron keyring holder that was a  wedding gift and the iron ‘D’ that SIL gave me for Christmas by the garage door.  Bradley also changed out the thermostat to a digital one, so that we can conserve energy.

In the stairwell, we hung the picture that Bradley made for me for our first Valentine’s Day.  I put it in a cool new frame with a mat I had to have custom made.  The paint color in the foyer and hallways was one of the only original colors we did not change out when we moved in.   It is Rhode’s Point by Ralph Lauren. 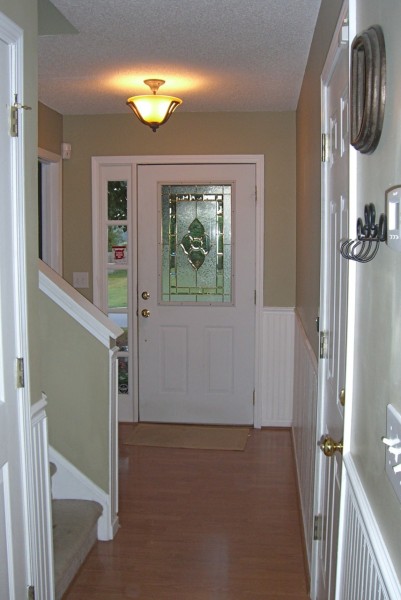 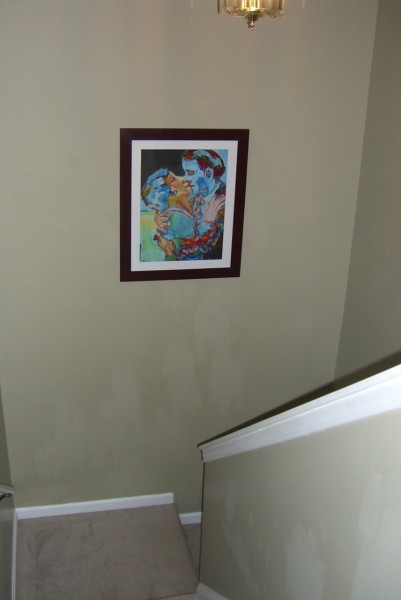 Most recently I have gone throughout the entire downstairs and repainted the bead board to freshen it up.

Wish List: The light hanging in the stairwell is still the shiny gold, so I would like to get a new one that will match the foyer light.  I would also like to get a small half-circle table to put in the foyer against the partial wall in front of the stairs.