We have been trying to decide for sometime now what color to paint our bedroom.  The previous owners had used a tan color with a pinkish hue to it.  It was neutral enough that we initially left it and figured we would come back to it later.  Well, later has come.  We wanted the room to be in the brown family, warm, but not caveish. 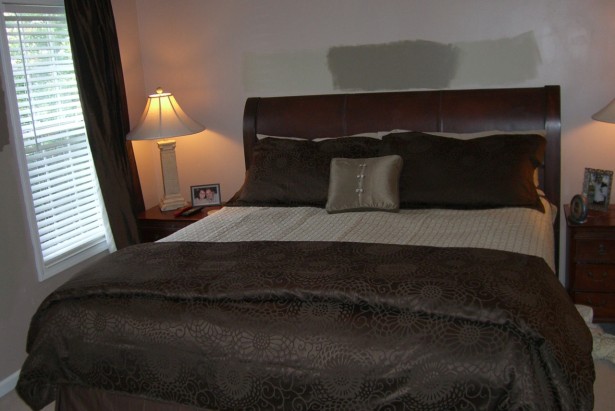 We got a few quarts of paint and tried them out on the walls to see what they were like in the different light.  (as seen in the first picture above the bed)  The first was too light, the second too dark.  The third I tried in the bathroom, and it was too gold.  Finally, I decided we should just buy something and live with it, because I had gone through every paint swatch at Home Depot.

We decided on Ralph Lauren Cairo Brown (RL Number: VM82).  But because I have commitment issues, I ended up adding a quart of white to it to lighten it, then I added the almost-full quart of the darker chocolate we had tried to make it more brown, since it had a red tint to it.  So all that to say it is a custom mix that we could never replicate…oops.

All day Monday was the prep work.  The previous homeowners had done a terrible job painting.  They had painted right over dust on the wall!  So we sanded, puttied, sanded some more, wiped down the walls, painted the crown molding, then primed the walls.

On Tuesday, wonderful hubby painted the room while I was at work. The picture is not great, and disregard the disheveled look of the room, because we aren’t quite finished yet.  I do think it is already looking warmer though.  I also did some touch-ups and freshened the paint on the window, door mouldings and the baseboards. 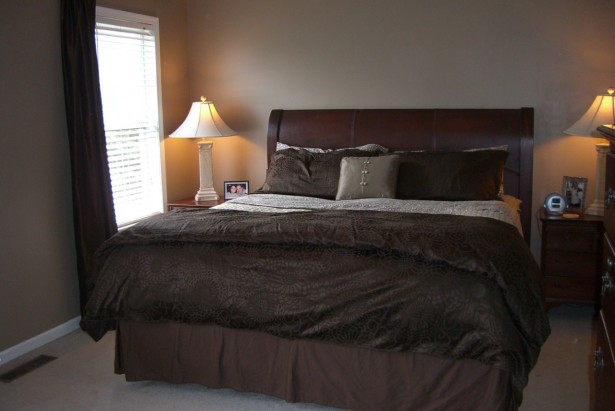 Then we put the curtains back up and next I will be brainstorming some ideas for art for over the bed.   I don’t want to put the same pictures over the bed as before, because now that we have a king sized bed, I think they look a little dwarfed.  I bought some cheap canvases, and I plan to try another idea I got from HGTV on it.  I won’t elaborate in case it doesn’t work.

And just for reference, here is a good look at the before color – very pinkish: 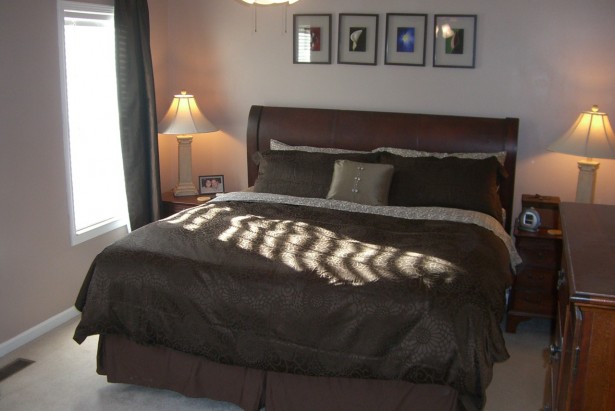