I thought I would share a little more about our new car purchase.  My Mazda has become more unreliable over the past year, so we knew it was inevitable that we would need a new ride before too long.  Bradley’s truck was paid off in September and we began putting money aside for the next car.  Unfortunately, it wasn’t long before the Mazda began acting up again.  Rather than sinking more money into what had become a bottomless pit, we decided to take the plunge.

We didn’t really consider buying used because of several factors: I like to keep cars for over a decade, so the depreciation of a new car is unimportant; the financing on a new car (0%) is much more favorable than getting a loan on a used car; and we shouldn’t need to start sinking money into car repairs for quite a few years buying new versus used.

Earlier this year, I began doing research on new car options.  I didn’t have a reason for it, but in my mind I had $18,000 as the max for a new car.  Luckily, I found that there are a ton of options in that price range. 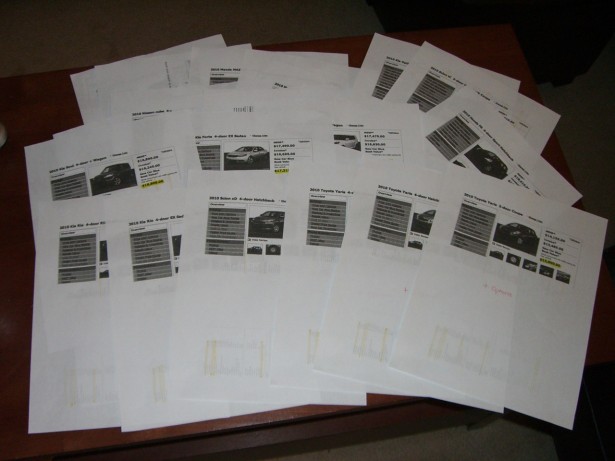 This was a good starting place for our search.  We first looked to see which car manufacturers were offering 0% financing.  That narrowed our search to Nissan, Toyota, and Mazda.  From there, we checked consumer reports.  It looked like the Mazda3 and the Nissan Sentra were going to be front runners.  Then we noticed that the Honda Fit got great reviews on CR.  We decided to throw it in the mix, because Honda was offering 0.9% financing, so not bad at all.

We spent Friday going to the four dealers, test-driving cars.  We drove the Corolla (and eliminated the Yaris), the Sentra (and eliminated the Versa), the Mazda3, and the Honda Fit.  We had assumed the Honda Civic would creep out of the price range quickly, but the salesman assured us that it was also an option for us.  As soon as I drove it, I had a good feeling about it.  Bradley really liked the Sentra and Mazda3, but he was happy that I was happy.  I had made notes after each test drive to keep track of all the details.  The cars in this range are so comparible in price and quality that it really comes down to the details.

I have always been impressed with the number of older Hondas that you still see on the road, and consumer reports confirmed my assumption: Civics are rated very highly and have a lot of customer satisfaction.  And it would easily fall in our price range.

We made the decision that evening and hatched a plan for Saturday morning.  We would tell the salesman that we had narrowed it down to the Mazda and the Honda, but Mazda was offering 0%, so if Honda would credit us the $400 we will pay over the loan, then we would head back to the dealer for the sale.  They agreed and we were one step closer to having a new car.

I have never dealt with dealerships or buying a new car, so everything was so new for me.  The financing process went smoothly and we felt really good about our decision and our timing on this purchase.

We left the dealership in our Polished Metal Metallic 4-door 2010 Honda Civic with 11 miles on it.  I don’t know that I have ever seen an odometer with less than 4 digits on it:) 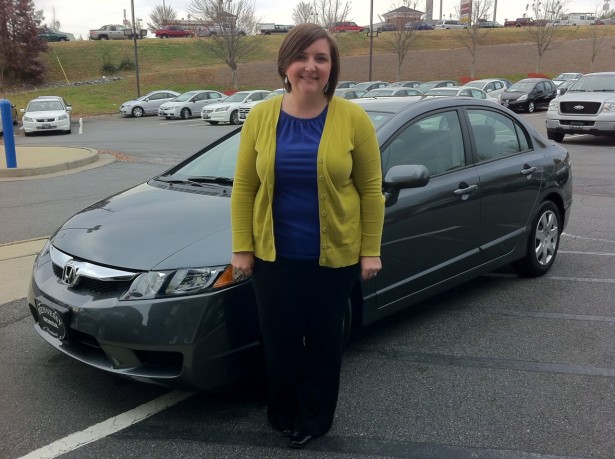