At the end of October, we noticed a  water spot on the kitchen ceiling.  I knew it was right under our master bathroom shower.  Bradley cut some of the drywall out and we could see the drain from the shower, covered in white residue with a single drip of water every so often.  We had a contractor in our neighborhood look at it for us, and not surprisingly, in our 40-year-old home, we had a leaky shower pan.

Bradley had four contractors look at the bathroom, but only two ever came back with an estimate.  I had always wanted to expand the shower into the dead space between the shower and the linen closet because it was so small you had only enough room to turn around inside.  So we had the contractors let us know what that would cost and what it would cost to also move the toilet and vanity around to make better use of the space.

Because the renovation was due to a leak, and not a result of saving for it, we decided just to expand the shower.  That option did include replacing the floor tile and the toilet, but no plumbing was moved.

Here was the bathroom when we toured the home two years ago: 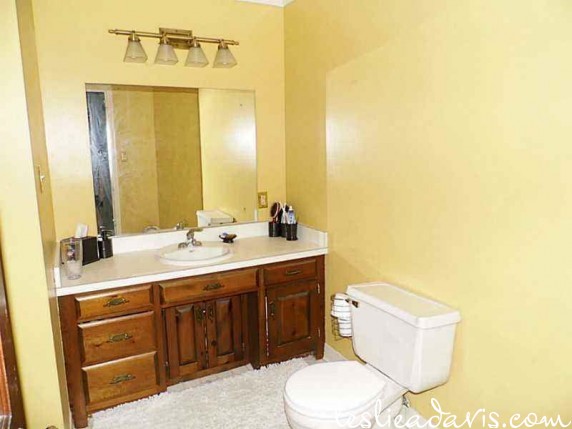 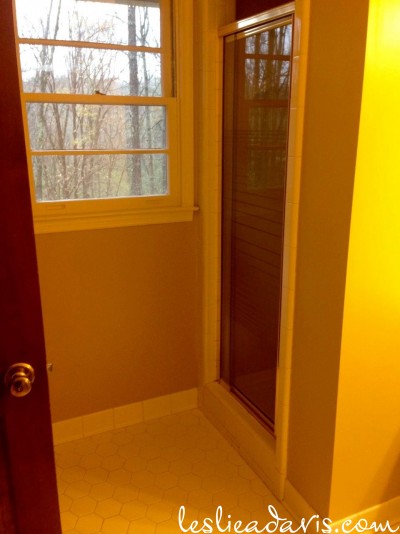 After we moved in, I did a few minor DIY projects – painting the vanity and the walls, adding new hardware, and a towel ring.  Here is the bathroom before renovation began: The room had white hexagon tile on the floor and white square tile in the shower.  Not bad, but had to go. The entire renovation took three weeks.  The only problem they uncovered was some rotten subfloor evidently due to an old toilet leak. The door to the linen closet was closed up, and an angled wall was put up to expand the shower size.  I had them make an arched opening for the shower.  A smaller opening was made for the linen closet on the wall behind the bathroom door.  The closet remained the same size but is now deeper and less wide with the opening moved. I chose white octagon and dot tile for the floors and standard subway tile for the shower walls.  The grout is a warm grey.  I had them take the tile to the ceiling – I never understand stopping the tile a foot or two from the ceiling.  They also installed two niches for us – one 12×12 and one 6×12.  A small foot prop went in under the window for shaving my legs. It turned out that we were able to keep our original window because it is not near the water from the shower.  Also, it is high enough that we didn’t even have to replace the glass with tempered.  The contractor used an oil-based enamel-like paint to protect the wood from any moisture.  The tiler did a great job around the window, and also lining up the rest of the tiles considering all of the funky angles and niches. The only area I wasn’t happy with was the threshold of the shower opening.  The tiles didn’t line up with the sides of the arch.  I understood why, but still didn’t like the way it looked.  Turns out the tiler probably thought we would be installing a glass door that would hide the tile in the center of the threshold.  I opted not to have a door on the shower.  I hate trying to keep glass in a shower clean.  The fix we decided on was a piece of marble with a slight overhang on the threshold. I decided to change the paint color from the same as our bedroom to Sherwin Williams Rainwashed.  Depending on the light in the room, it can appear more blue, green, or grey.  The vanity and trim are painted Sherwin Williams Dover White. There was already a light in the shower, but we had them change it out to a light/exhaust fan combo.  They were able to put a timer on the fan for us and split the line to have the light on it’s own switch. In the linen closet, they installed new shelves to my specs.  We added roll-out wood baskets on the shelves to make it easier to reach items in the back of the closet. We plan to save up and have custom cabinetry doors added to the linen closet.  For now, I had them leave it as a simple drywall opening.  We will also change out the vanity in a couple of years.  I ordered extra floor and baseboard tile so that we can continue it under the vanity when the time comes.  If I can find a mirror I like that isn’t too expensive, I would also like to change that out.  We are on the lookout for a piece of art to go on the wall with the commode as well. 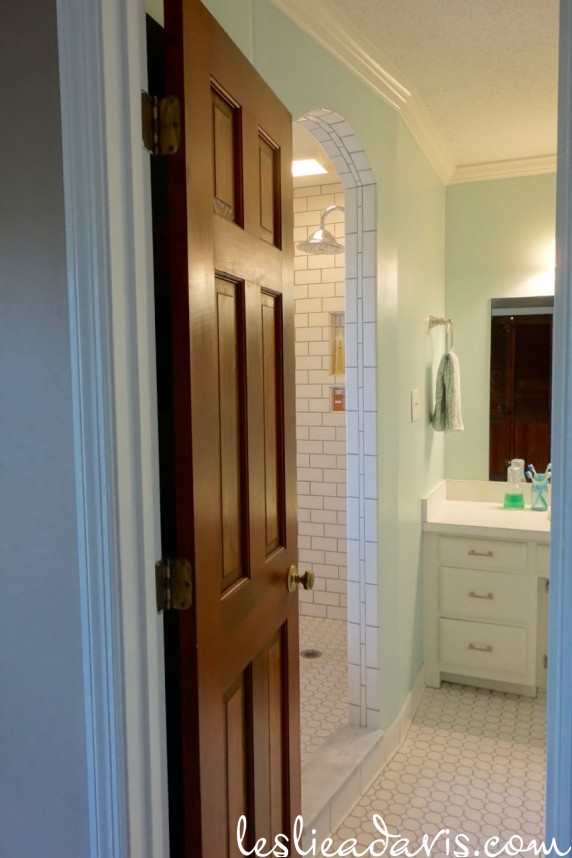 The electrician added an outlet to the funky angled wall in the corner of the bathroom so that we could set up our towel warmer inside the bathroom.  It had previously been outside the door in the sitting area of our bedroom. Finding a toilet was a little difficult because I prefer a standard height versus the popular ‘chair height’ or ‘comfort height.’  Also, I was set against having a button on top of the tank for flushing.  The plumber switched out the contemporary handle that came with the toilet for a polished nickel one from the same line as my towel ring – Moen’s Waterhill collection. The drawer pulls are from the Martha Stewart collection at Home Depot. We changed out the vanity light ourselves.  The original one had an antiqued brass finish, so I ordered this one from Feiss on Amazon.  I think it picks up on the details of the drawer pulls nicely.