There has been a ton of inspiration floating around the internet for throwing a ‘Little Man’ baby shower (aka mustache bash).  I got to help with a family shower recently, for which we pulled together some crazy cute ideas, most of which can be sourced from this Pinboard.  The colors were light blue, green and black.

We used a reception room at a church, so we didn’t have to worry about finding tables or having enough parking space.  Here is the welcome table.  I purchased a book off the registry to use as the guestbook.  The black frame came from Hobby Lobby. 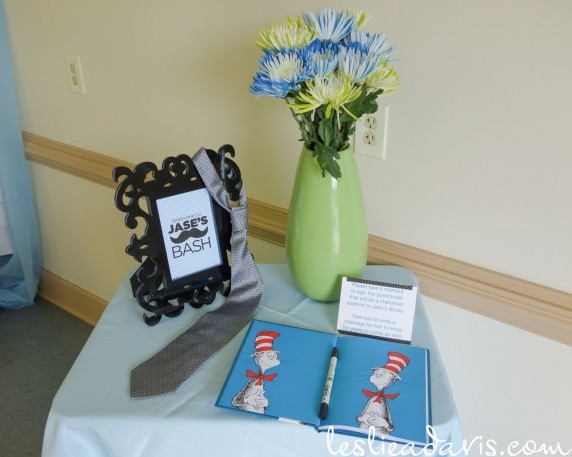 We were pushing it on time to get all of the decorating finished, so the gift table was the last thing we worked on.  I had punched holes in one end of some dollar store tablecloths to hang as the backdrop.  Another hostess made the adorable necktie onesies hanging over the backdrop.  I think I might have made a banner with mustache and/or necktie cutouts to go around the long or round table if I had had a little more time. 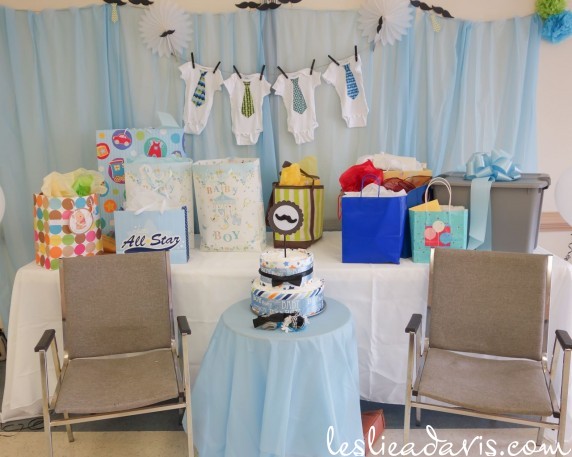 Here is a close-up of the diaper cake I made.  I used some of the receiving blankets the couple had registered for to wrap the layers and topped it with leftover ribbon from the first diaper cake I made a couple of years ago.  I found the bowtie at Goodwill.  The topper was cut using my Silhouette, and the mustache was from a dollar store pack.   The picture also shows the corsage and boutonniere that I made using baby socks. 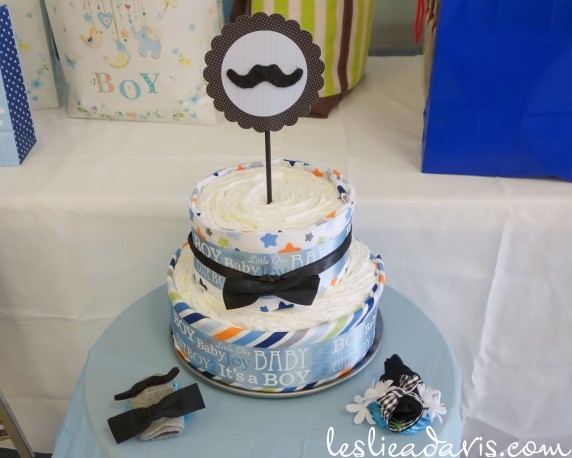 In the back of the room, we set up a couple of homemade games and a photo booth for the guests.  One of the other hostesses made the adorable penant banner and all of the photo booth decor.  She also picked up some white balloons and added mustaches to them – so cute!  As part of my gift to the couple I bought items that we could use to play ‘The Price is Right: Baby Edition.’  Each game card listed the items on the table and gave a bank of prices from which to choose.  It proved to be difficult because a few items were the same price, and I didn’t reveal which price was used multiple times.  The second game was ‘Name that ‘Stache.’  I pulled and cropped a dozen pictures from the internet of famous men with mustaches.  The mother-to-be ended up winning by correctly guessing 11 of the 12. 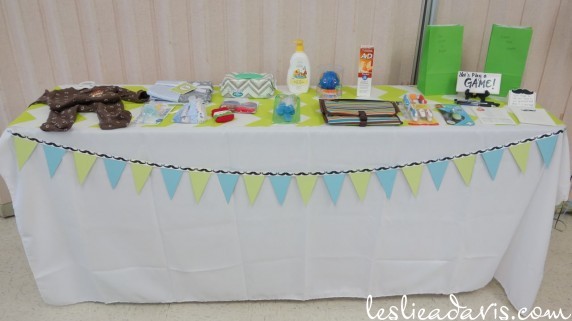 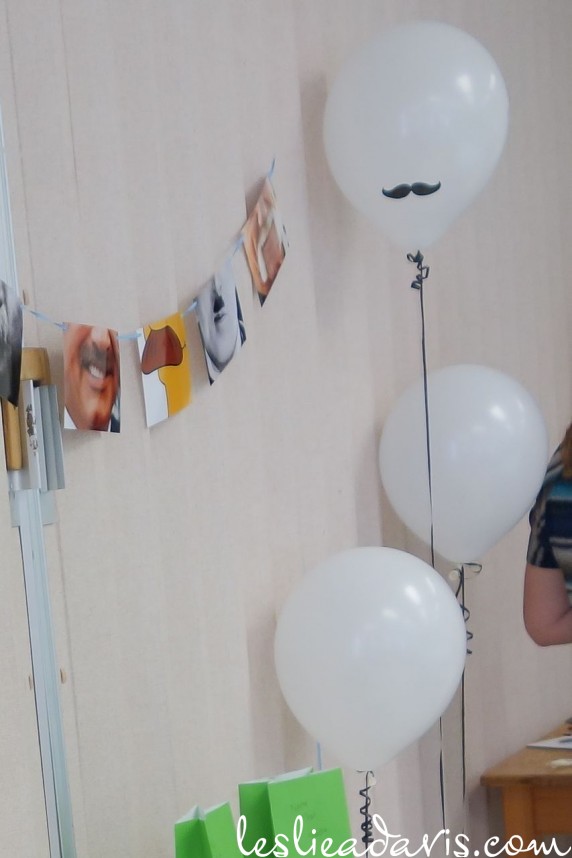 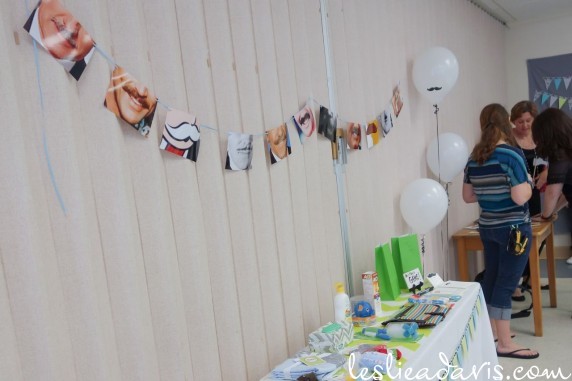 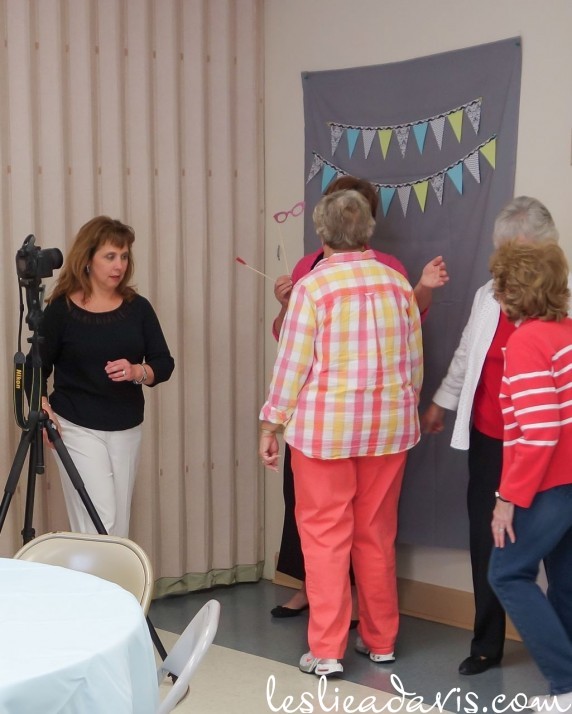 Our food buffet consisted of ‘Man’wiches (recipe), bowtie pasta salad (recipe), grape salad, ‘little man cigars’ (chocolate-covered pretzels), cupcakes and a veggie platter.  I made the pineapple-lemonade punch from this blog post.  I made the paper rosettes out of blue chevron cardstock using this tutorial.  Bands of the same paper wrapped around Ball jars that held the utensils tied the accents together. Using this tutorial, I made the napkins into little bowties.  Another hostess made mustaches to fit over the straws for the drinks. 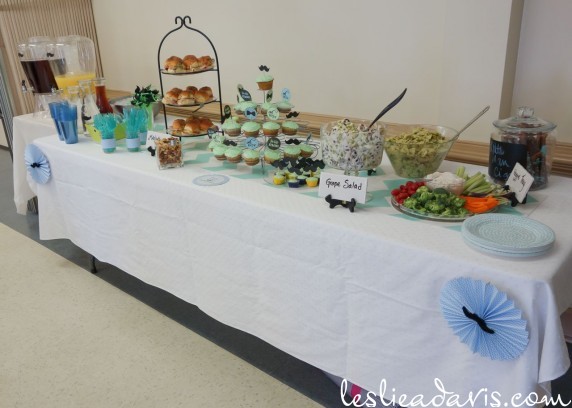 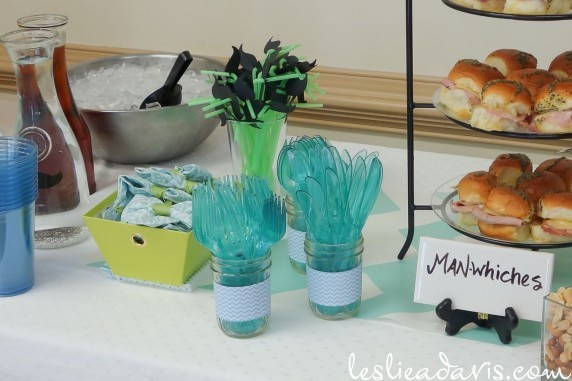 Lastly, we used round tables for guests.  I had purchased blue tablecloths a couple of years ago for another shower and was able to get another use out of them.  The centerpieces were simple with a piece of patterned cardstock, topped with a glass bottle filled with green paper grass and mustaches on skewers.  One of the hostesses made the bowtie favors out of small packages of M&Ms. 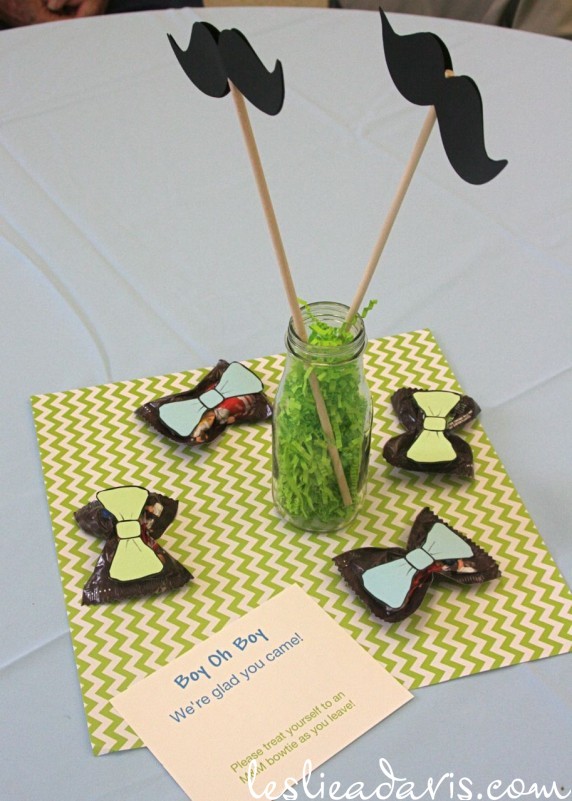