Wibble came into my life in the fall of 2001.  I was at my high school/college job at a Veterinarian’s office.  A kind woman brought in a tiny deformed kitten that had been abandoned under her porch.  She was allergic to cats, so one of the vet techs took him in and nursed him for a few weeks.  I convinced my parents that we needed to be his forever home.  The vet tech had named him Egor, but my mom hated it so his name changed to Wibble because he wibble-wobbled when he walked.

My dad took him to a specialist, because he is a complete softy about animals.  We learned that he was basically missing the major bones in his back legs.  The back right leg was completely turned upward, the back left leg was skinny and limp, he had crooks at the base and tip of his tail, and his left front leg was turned in above the paw.

From day one, we learned what the attitude associated with Siamese cats is all about.  He was a punk and a total diva about having things his way.  We were always accommodating – how could you not be, he was broken!  Surprisingly, he could run around the house, climb stairs, and even claw his way up onto a piece of furniture as fast as a normal cat could jump onto it.

His coloring got much darker over the first couple of years and his face shape elongated, but the crystal blue eyes remained the same.  He never seemed to even acknowledge that he had limitations.  We figured he felt that we were there just to lift him on the furniture whenever he wished.  If there was something on the floor, he would somehow find a way to lay on it, whether it be a shoe, a box, a plastic bag, or just a piece of paper.  His other quirk was something I researched and found is commonly called wool-biting and is evidently something a lot of Siamese cats do.  He would get completely caught up in suckling on a blanket, or shirt in some cases, and rocking back and forth like he was in a trance. 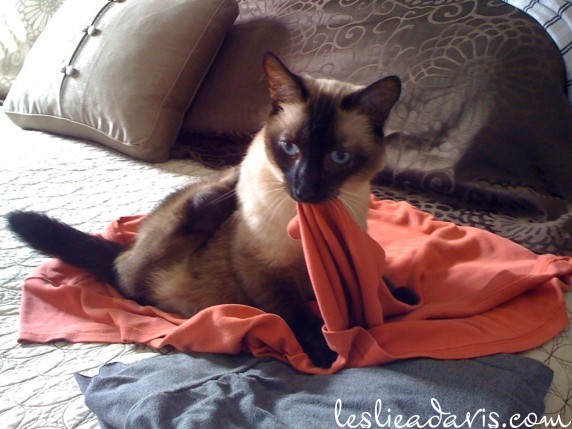 He stayed with my parents when I transferred to UGA my sophomore year of college as well as for the first two years of marriage while we were living in a one-bedroom apartment.  He came to live with me again in 2007 when we moved into our first house.  His punk Siamese attitude really mellowed and he became more like the loving lap cats we always had before him when I was growing up.  But there were still times that he would just give you a look that we called the ‘What the hell’ stare.

From the very beginning, we had no way of knowing how long his life expectancy was.  Cats born with his type of defects never survive because they are abandoned and die.  He had just been very lucky.  In 2010, he started having mouth pain.  I took him in every six months for another round of antibiotics and steroids.  That wasn’t a good long-term plan for a chronic problem, so when the mouth infections were cropping up within a few months of one another, we decided to have all of his teeth pulled.  It was a scary prospect, not to mention expensive, but it was the best plan for a case like his.  That happened in July 2012.  He bounced back amazingly! 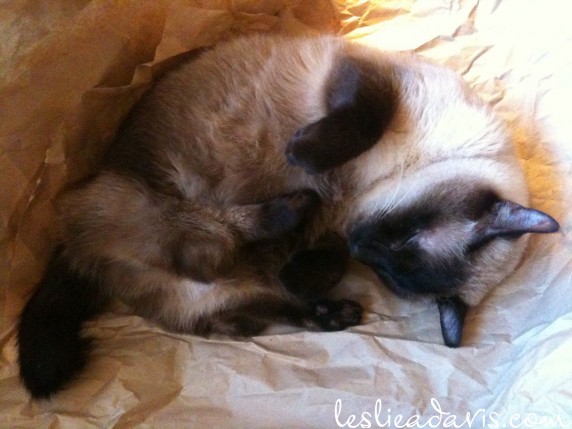 Unfortunately his problems weren’t over.  In October, we noticed that the normally small pad he had built up on his twisted back leg was growing.  I took him to the vet, where the leg was drained of a very viscous liquid like joint fluid.  It never went back down completely and after another draining, it ended up rupturing on its own.  My cousin’s wife became his doctor during all of this and she put his x-rays and pictures on a consultation board and the response she received over and over was that no one could believe that he had survived, much less for 11 years and with as much mobility as he had.

He wouldn’t leave the rupture opening alone and it opened into a huge sunken sore.  That filled in with tissue and we could finally take a biopsy.  Unfortunately, it came back positive as cancer.  After consulting a specialist, we learned that it was a very localized type of cancer, so in a normal cat, the course of action would be removing the leg and doing radiation.  Losing a leg when he is already so broken seemed like it would be too much for him.  After thinking over the options and what would be best in our special case, we decided to take no further action other than making sure his last few months were as comfortable as possible.

The cancerous area continued to open sores and drain.  He was eating fine and extremely loving, but his mobility decreased and he lost weight.  Every morning I would carry him downstairs, put him on a special area I had made for him to go to the bathroom, feed him, and make him comfortable on the couch.  When I got home from work, we would go through the same bathroom/feeding routine, then at night I would carry him upstairs to sleep with us in a nest of old blankets on the bed.  He seemed content and happy up until the very end.  We decided to go ahead and put him to sleep when we could tell the tumor had started to outgrow the blood supply by the smell of the afflicted area.  We wanted to make sure he was gone before we saw signs of real pain and suffering.  Thankfully, we were able to be at home when he was put to sleep – less stress for him and for us.

I have never been a part of the decision-making and actual euthanasia of any of our childhood pets, so this was a first and has been extremely difficult to process.  I know we made the right decision and that the timing was best for him.  I think I am thankful that I knew it was coming so that I was able to prepare and spend a lot of time with him.  I won’t ever regret neglecting the dishes in the sink in order to just sit with him on the couch the last couple of months we had him.   The first couple of days without him were the hardest, because he was so integrated in my routines.  I had to cope with all the ‘firsts’ of not having him around.  As trying as he could be at times, all-in-all he was a great companion and I am so thankful that he was in my life.  He has now joined the small group of wonderful pets from the past, all buried lovingly in my parents back yard.